The Conspiracy of Beards.

Leonard Cohen is a legend among men. He creates a lyrical & poetic landscape of pure romance and unapologetic smut with one deep throated whisper. He makes even the most grizzled man whimper for the love of a woman, and yearn for nostalgia once forgotten. Listening to his music makes women aware of the depths of a man's soul and his plight through this complicated world. He is mans answer to romance. "roMANce" if you will. When I hear songs like Chelsea Hotel, Suzanne, I'm Your Man, and countless others- I sense an intimacy and subtle understanding of the harsher sex. He relays information to me about what it might be like to be an intelligent, concise, and creative man. Countless scores of men have chosen to sing Leonard Cohen's music over the years. He has become a celebrated- yet obscure beacon of light in the arena of emotional masculine expression. A tip of the trademark fedora is due to this icon among men.

So, I ask you this, what is better than one man crooning the songs of Leonard Cohen? Why, THIRTY of them of course!

The Conspiracy of Beards appeared in my "Upcoming Shows" list via Sonic Living on my Pandora a few months ago. I was instantly intrigued. I looked them up and discovered that they are a 30 man A Cappella group who sing the songs of Leonard Cohen. Emails instantaneously ensued. Like a crazed whirlwind, my comrade Lee Ann and I set the date with Sara. We ended up having a cabaret style lunch complete with booze, very delicious food, and the music of Leonard Cohen.

A rather sweet opening act- who's name I can't remember right now, played sweet songs on his guitar and sang with his eyes closed. I definitely dug his style. Very chill. 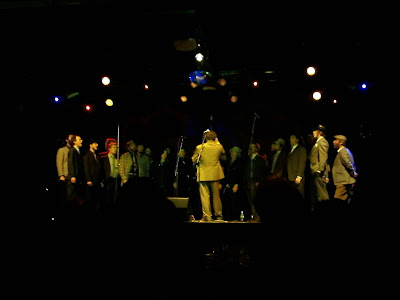 Then, on shuffled 30 men, all in suits, varying in age and style. At first I was disappointed when I saw that only some of the men were BEARDED... but then, they started with "If It Be Your Will" and all was forgiven. WOW is all I can say. Simply wow. They sounded INCREDIBLE.

A choir of the MANLIEST angels ever!

They held my attention for the entire performance. I was worried that it was going to feel silly, or become formulaic and get "old" fast, but that never happened. These men are genuine and have very obviously dedicated themselves to each song and its performance. They treated each tune with the utmost respect and made even the more "trite" lyrics suddenly sound sacred (i.e. "All the ladies go moist" and the song, "Don't Go Home with Your Hard On"). Incidentally, I fell in love with every baritone up there. As a deep voiced lady m'self, I got to say I have a soft spot for any man who's voice is on the verge of being a low frequency pitch nearly unrecognizable by human ears. I could gush all night at the perfection of this choir... their panache, their pitch, their humor, their grace, even their choice of songs from Mr. Cohen's catalog. They performed- If It Be Your Will, Suzanne, So Long Marianne, Tower of Song, Who By Fire, Hallelujah, Chelsea Hotel, First We Take Manhattan... and so many more incredible songs. All that is left to say is this, if you love Leonard Cohen and find yourself in need of a good thorough crooning, do yourself a favor and see Conspiracy of Beards.

And now, I leave you with the closer (see below post)
As Written by Madame K around 1:16 AM

Madame K
I love love LOVE music... I am a pure listener and fan... also- I LOVE to eat, it's a religious experience. I want to write, so I thought this would be a good way to practice...